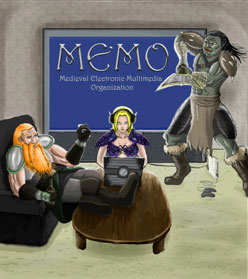 While the idea of analyzing modern medieval media is far from new, our organization recognizes a difference from works existing prior to the Postmodern Era and works now bursting forth and away from the ideals of Postmodernism altogether. The Medieval Electronic Multimedia Organization (MEMO) was officially founded in May, 2002 at the International Congress on Medieval Studies (Medieval Institute, Western Michigan University, Kalamazoo, Michigan). MEMO was officially named during a dinner meeting, but the original members have been banding together for quite a few years. Prior to the official existence of MEMO —as several of us were e-mailing furiously to clarify what we were studying and planning to present at that year’s International Congress on Medieval Studies (Kalamazoo, Michigan)—we found ourselves plagued by internet interruptions: worms, viruses, server meltdowns, and hard-drive crashes. We began to joke that Neo (of The Matrix films) was taking over and destroying our attempts at communication via the internet.

Since then, Neo has become a part of much of the humor in our discussion. And that brings us to the humor in our term, neomedievalism. Most of all, the character Neo represents the neomedievalist participant: from creating or watching digitized medievalist films television programs, to creating or playing digitized medievalist music, to “living” a second life in a medievalist universe in cyberspace. In neomedievalism, Neo takes both the blue pill and the red pill, allows his consciousness to become enveloped within the realm of a defined medieval alternative reality while his body remains safe and secure within the realm of what we know as human everyday reality. But the line between realities is thin and transient, making it increasingly difficult to determine which is the “true” reality. (In this age of Special Relativity, Quantum Mechanics and String Theory, who is to say what is and isn’t real?) neomedievalism, then, is an illusion of reality that may or may not be also an illusion, but it is an illusion of which we are aware of a sense of control.  For more information, please see our list of  DEFINITIONS (below). 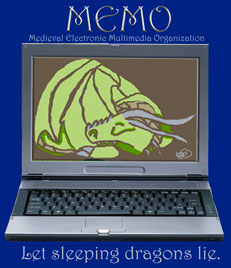 Medieval Electronic Multimedia Organization is in the process of trying to become non-profit.  The BOARD OF DIRECTORS is in the process of developing the  MISSION and  VISION STATEMENT.  Our original vision was for scholarship, including the publication of our 2012 anthology Neomedievalism in the Media and various essays in Studies in Medievalism, for The Year’s Work in Medievalism,  for books put out by Tales after Tolkien Society, and other organizations.  We have also been actively involved in several conferences over the years, including: the International Congress on Medieval Studies, the International Conference on Medievalism, and BABEL Working Group Meetings.  However, MEMO has decided to broaden it’s involvement and contributions to creativity and scholarship—significantly—with plans for building The UNICORN Virtual Museum of Medieval Studies and Medievalism (in cooperation with other organizations, societies, and places of higher education) and with goals of sponsoring:

Some Basic Definitions to Consider

NOTE:  The below definitions are intended as starting points for discussion, nothing more. A significantly more 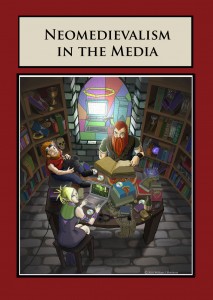 detailed analysis and historical tracing of the meanings of neomedievalism may be found in several of the publications produced by members of MEMO, including  several publications in various volumes of  Studies in Medievalism.  In fact, the below definitions were used to inspire debate in MEMO’s 2012 book, Neomedievalism in the Media: Essays on Film, Television, and Electronic Games.

MEDIEVALISM: “Medievalism is the study of responses to the Middle Ages at all periods since a sense of the mediaeval began to develop. Such responses include, but are not restricted to, the activities of scholars, historians and philologists in rediscovering medieval materials; the ways in which such materials were and are used by political groups intent on self-definition or self-legitimation; and artistic creations, whether literary, visual or musical, based on whatever has been or is thought to have been recovered from the medieval centuries. The Middle Ages remain present, moreover, in the modern consciousness, both through scholarship and through popular media such as film, video games, poster art, TV series and comic strips, and these media are also a legitimate object of study, if often intertwined with more traditionally scholarly topics. ”
(Tom Shippey, Studies in Medievalism)

MODERNIST MEDIEVALISM:
Experimental contemporary “medievalist” narratives that contain stereotyped medieval characterizations and plots infused with an awareness, exploration and elevation of individual unconsciousness and consciousness: medieval romances, for example, with psychological depth. The values in such works are Modernist (full of angst and a sense of the futile) combated by an idealized “happy” and/or more “simple” life of the Middle Ages. They are fictions that imply historical discontinuity, rejecting traditional values and assumptions.

POST-PUBLICATION REVISION: Experimental medievalist fictions that imply historical discontinuity, rejecting traditional values and assumptions. rewritten medieval values and assumptions into new values and assumptions, but framed within symbolic antiquities associated with the Middle Ages. Full of angst an a sense of futility, an infusion of what we perceive to be medieval characterization, plot, and fantasy with an awareness, exploration and elevation of the individual unconsciousness and consciousness. Such works may contain, for example, contemporary “medieval” narratives that contain stereotyped medieval characterizations and plots infused with an awareness, exploration and elevation of individual unconsciousness and consciousness: medieval romances, for example, with psychological depth.

POST-MODERN MEDIEVALISM:
More “medieval” than Modern Medievalism in that they are contemporary “medieval” narratives that recognize an inability to understand the past any than one can understand the future. Thus, they are more authentic to medieval values and assumptions in that they recognize the infiltration of modernist ideology and reject it. Fragments of a fragmented history, a synergism of histories, seamless and constantly changing histories that strike us as “medieval.”

POST-PUBLICATION REVISION: More “medieval” than Modernist Medievalism in that it is more critical of contemporary perspectives of medieval values and societal codes, these narratives are overtly constructed and synergized fragments of a fragmented history, seamless and constantly changing in perceptions and interpretations of the medieval without idealizing these changes and perceptions.  Thus, they are often less comprehensive: fragments of a fragmented history, a synergism of histories, seamless and constantly changing histories that strike us as “medieval”–whether or not they truly are medieval in nature. A recognition that we don’t really know the past any more than we know the future (much less the current zeitgeist). In other words, contemporary “medieval” narratives that recognize an inability to understand the past any more than one can understand the future.  Because they are often self-reflexive, such narratives may be more authentic to medieval values and assumptions in that they recognize the infiltration of modernist ideology and reject it.

NEOMEDIEVALISM:
Involves contemporary “medieval” narratives that purport to merge (or even replace) reality as much as possible. There is no longer a sense of the futile and is thus more playful and in greater denial of reality. Neomedievalism engages alternative realities of the Middle Ages, generating the illusion into which one may escape or even interact with and control—be it through a movie or a video game. Already fragmented histories are purposed as further fragmented, destroyed and rebuilt to suit whimsical fancy, particularly in video games, where the illusion of control is most complete. Surrealism becomes less of a fantasy or nightmare and more of an illusion of reality that might even be controlled. The idea of the contemporary person existing in the Middle Ages, such as Mark Twain’s Sir Boss (A Connecticut Yankee in King Arthur’s Court) is no longer an absurdity, or rather, it is no less absurd than the idea of fantasizing and even reliving the Middle Ages. It is a seriously gleeful embrace of the absurd.

POST-PUBLICATION REVISION: Neomedievalism is a neologism that was first popularized by Italian medievalist Umberto Eco in his 1973 essay “Dreaming in the Middle Ages,” and has been used in a variety of way since. Angst becomes aggression. Histories are purposely fragmented. The illusion of control is made through changes of the illusion, rather than attempted changes of reality. There is no longer a sense of the futile, or at least it is second-staged by an illusionary sense of power and a denial of reality. Medieval concepts and values are purposely rewritten as a consious vision of an alternative universe (a fantasy of the medieval that is created with forethought). Furthermore, this vision lacks the nostalgia of earlier medievalisms in that it denies history. Contemporary values (feminism, gay rights, modern technolgical warfare tactics, democracy, capitalism, …) dominate and rewrite the traditional perceptions of the European Middle Ages, even infusing other medieval cultures, such as that of Japan. Neomedievalist stories are contemporary “medieval” narratives that purport to merge (or even replace) reality as much as possible; compared to postmodernist and modernist medievalisms, they are more playful and in greater denial of reality.
*Neomedievalism is also a term used in political theory, and was first discussed in 1977 by theorist Hedly Bull in _The Anarchial Society: A Study of Order in World Politics_ (pg. 254-55).