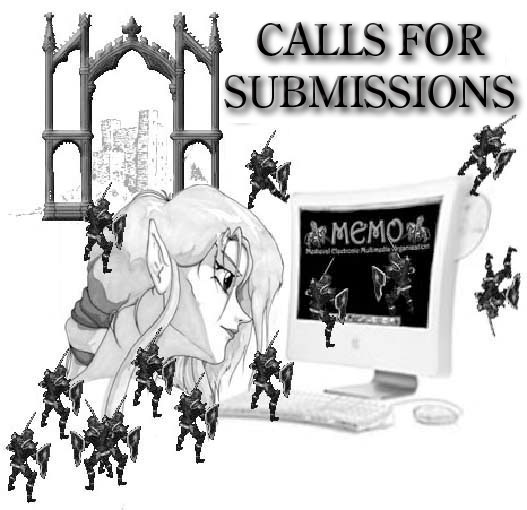 Since its founding in 1976, the International Society for the Study of Medievalism, several other groups focused upon more specific aspects of medievalism have sprung up, including Medieval Electronic Multimedia Organization, which was founded in 2002 and focuses upon the neomedieval in film, television, video games, music, and other electronic/digital media.  Still other groups have been founded that focus upon the post-post-medieval (fantasies of medievalist fantasies of the medieval), such as the  Tales after Tolkien Society, which was founded just recently (2013).  In addition, smaller conferences have sprouted off from this relatively large conference, such as ISSM’s Annual Conference on Medievalism, which will be hosting its 29th conference (October 24-25, 2014) at Georgia Institute of Technology.  There is discussion that these three smaller organizations (ISSM, MEMO and TaTS) might work together to form a cloud conference (a conference functioning fully online), as MEMO and ISSM did for the 27th International Conference on Medievalism, but the real home for medievalism is to be found at the International Congress on Medieval Studies.

All three of these groups (ISSM, MEMO and TaTS) were founded at the International Congress on Medieval Studies, (Western Michigan University, Kalamazoo, MI),  which will be celebrating its 50th Anniversary, May 14-17, 2015.  According to the conference web site:

The Congress is an annual gathering of more than 3,000 scholars interested in Medieval Studies. It features more than 550 sessions of papers, panel discussions, roundtables, workshops, and performances. There are also some 90 business meetings and receptions sponsored by learned societies, associations, and institutions. The exhibits hall boasts nearly 70 exhibitors, including publishers, used book dealers, and purveyors of medieval sundries. The Congress lasts three and a half days, extending from Thursday morning until Sunday at noon.

Here are the three organizations’ calls for proposals for

(I) WORKSHOP POSTER SESSION: Playing Medieval–A Festive Video Game Workshop and Poster Session
There will be two types of stations for this session.

(II) SESSION OF PAPERS: The Neomedieval Image
Paper proposals are invited that explore digital iconographic imagery of the medieval, particularly the neomedieval. How does he content of such images represent the medieval? What makes it uniquely neomedieval? What are some typical, or more common, depictions? Are there distinctions between Iconology and Iconography in medievalism, in neomedievalism? What about the “authenticity” of such iconography? Explorations of genres, themes, motifs, and tropes are encouraged.

Submit proposals or queries to:
Carol L. Robinson (clrobins@kent.edu)
Abstracts of roughly 300 words and completed Participant Information Form must be submitted by September 15, 2014.

The Tales After Tolkien Society will be sponsoring two sessions at the Kalamazoo ICMS, May 14-17th, 2015: one of papers, and one round table. Twenty-first century popular culture is structured by genres; they shape its processes, products, and reception. Neomedievalisms permeate most if not all major pop culture genres, from historical, fantasy, and crime, to children’s, science fiction, and westerns. In these two panels, the Tales After Tolkien Society seeks to explore the profound ways in which genre influences contemporary representations an readings of the Middle Ages, and, conversely, how ideas about the Middle Ages might shape genres. Both sessions will ask, for example, how contemporary social and cultural trends and concerns intersect with the medieval in genre fiction.

Proposals from scholars and professionals at any stage of their careers with an interest in these topics are welcomed. People of color, LGBTQ people, and members of other marginalized groups are encouraged to propose papers. Submissions must follow the rules as set out by the Medieval Institute.

(I) Session of Papers: Martin and More: Genre Medievalisms
George R. R. Martin’s A Song of Ice and Fire novels are among the most visible and popular medievalist works in the present day, but they are not the be-all and end-all of genre medievalisms. The session of papers, focused on genre fiction, seeks in-depth explorations which focus on a single twenty-first-century work, series, or author’s corpus. They may consider Martin’s work, compare and contrast it with that of another author, or examine a completely different contemporary literary re-imagining of the Middle Ages. Questions which might be considered include, but are not limited to the following. How do genre conventions shape the use of medieval material and vice versa? How do technological developments and the explosion of multi-media genre products including film, television and video-gaming engage with literature? How do representations of race, gender, and class intersect with medievalism in contemporary fiction genres? Papers examining cross- and multi-genre works are welcomed, as are interdisciplinary approaches.

(II) Round Table: From Frodo to Fidelma: Medievalisms in Popular Genres
The round table aims to compare and contrast the medievalist conventions and practices of a wide range of genres, which might include but are not limited to not fantasy, children’s television, crime, role-playing games, and romance literature, examining examine genre conventions, phenomena and trends. By doing so, the session seeks seeks to identify cross-genre trends, as well as to highlight the multiplicities of contemporary medeivalisms. Presentations focussing on the medievalisms of a single genre – which may be loosely or closely defined – across a decade or more of the late twentieth and twenty-first centuries are sought. Tightly focussed explorations of, for example, medievalism and gender, violence, race, or dis/ability in a given genre or across multiple genres are also welcome. Presentations may take a single work/series/corpus as an example, but these should illustrate broader points about the given genre. Papers in the session witll be 7-10 minutes in length.

An abstract of 250-300 words accompanied by a Participant Information Form, available from the submissions website, should be sent to Helen Young at helen.young@sydney.edu.au by Monday 15th September, 2014. Submissions should clearly state which of the following panels they are intended for.

International Society for the Study of Medievalism (ISSM)

The International Society for the Study of Medievalism is sponsoring three sessions at next year’s Kalamazoo Medieval Congress:

Medievalism Studies commonly explores manifestations of the medieval in popular modern diversions like television, film, and gaming. Less explored is how medievalism plays a role in asking the ‘big’ theological questions that continue to challenge humanity. This panel will be a conversation about existence and the role medievalism plays in imagining that existence, whether through the detachment of philosophy, the passionate attachment of faith, or more commonly, some combination of the two. We welcome papers that address some of the following questions:

—What unacknowledged debts are owed medieval thinkers in spiritual or religious conversations that follow the Middle Ages?

—How is the medieval past used as a marker of either intellectual inspiration or a ‘dark age’ of anti-intellectualism?

—What medieval rituals, patterns of thought, or ways of knowing the unknowable remain with us today?

—Is there wisdom in the medieval past that could inform some of the religious, spiritual, or philosophical concerns of the present?
(II) Political Medievalisms

As early as Henry VIII’s commission of his own portrait on the Winchester Round Table, medievalism has played a role, often a pivotal role, in political maneuvering. Today, as right-wing politicians make huge political and military gains across the globe, the language of medievalism permeates both the far-right calls for crusades and caliphates and liberal warnings about “medieval” laws that will take us back to the “Dark Ages.” We welcome submissions that move past offering historical validation or correctives and instead interrogate what medieval ‘means’ to political discourse. We also welcome submissions that analyze the uses of medievalism in a variety of time periods and geographical locations.
(III) Round Table: Critical Mediations

The contemporary theoretical trends that have swept through Medieval Studies—new materialisms, aesthetics, OOO, ecocriticism, and interdisciplinary approaches involving physics, biology, computer science, and game theory—all have the potential to trouble notions of time, disciplinary borders, and traditional academic boundaries. Both medievalists and medievalismists have adopted these approaches with compelling and creative results, despite the fact that such approaches are heavily invested in their sense of themselves as contemporary, digital, postmodern, or post-human. This round table will explore what medievalism can give back to theory, asking participants to imagine how work in Medievalism Studies, which has a long history of transgressing disciplinary borders and literary periods, disrupting traditional definitions of ‘text,’ and even violating the boundary between academic and layperson, can help us reshape, enhance, or reimagine the latest innovations in theory. We welcome short (10 minute) contributions to this discussion.

Abstracts of no more than 300 words together with the Participant Information Form should be sent before September 15, 2014 to Amy S. Kaufman at amy.kaufman@mtsu.edu