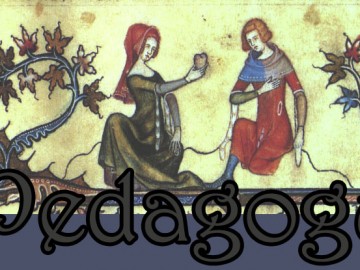 In my previous post on this topic, I outlined four concerns: 1) the advantages of chaos, 2) the disadvantages of accessibility, 3) the importance of community, and 4) the need for more direct involvement between student and instructor.  These concerns are supported by very simple observations of my general experiences in teaching students online during the past several years.  Generally speaking, most of these students live and work in the northeast Ohio area; many of them are the first in their families to go to college.  It is likely that I have a very limited perspective of teaching these students while online, certainly more limited than the perspective I might gain from teaching on-land.  Thus, part of my agenda is to try to find out if other online educators have similar experiences.  I recognize that this is not true scholarship, that I am relying too much upon personal teaching experiences, but it is these experiences that are generating my initial hypotheses and questions for my research in scholarship of teaching, particularly in terms of quality control of the online classroom.  In other words, please do not think that I think what I am writing is little more than anecdotal speculation, but anecdotal speculation is where my work begins.

Having made that disclaimer, I would like to go into a little more depth (ha!) with regard to the advantages of chaos.  Previously, I wrote:

Students hate chaos; they want everything to be extremely structured; they want the course to appear “simple” to them.  I am not sure that this is a good thing.  I do not mean that I think that students should have to struggle with the particulars of a course structure in order to learn its content, but I worry that a course structure can be laid out so simply that it causes the course content to also become too simple, reducing challenges for critical thinking and the development of other cognitive skills.

I was writing this statement in response to student evaluations and comments volunteered by students over the period of the semester in the online medieval literature class I taught last semester, as well as the medieval “half” of the online early British literature survey class that I have now also taught fully online, several times.  Students have complained that I require too much work: too much reading, too much discussion.  (The papers and exams, however, are apparently acceptable.)  I suspect that the forum work is a source of chaos for students.

This suspicion runs contrary to what seems to be the established understanding of asynchronous discussions in the online forum.  For example, Khe Foon Hew observes,

Typically in an online or blended learning environment, students and instructors may interact with one another synchronously or asynchronously. However, the time-indepen- dent nature of asynchronous discussion makes it particularly well received by many educators compared to synchronous discussion (Romiszowski and Mason 2004). One of the advantages of communicating at their own pace means that students who are shy, quiet, or who prefer more time to think before responding can have the opportunity to participate in the discussion.*

Hew divides these discussions into two types: those facilitated by the instructors and those facilitated by student peers.  I am the kind of instructor who has been allowing the students to mostly facilitate: I generate the topics and then evaluate their discussions, providing them individualized feedback that is comprised of a general impression of the depth of thought and coherence of their participation.  Hew has found support in research for this approach: “Results of previous research on peer facilitation have suggested that students felt more comfortable vocalizing their views, brainstorming for ideas, and challenging one another’s ideas in a peer-facilitated discussion environment (Baran & Correia 2009; Correia and Davis 2007; Cheung and Hew 2010; Poole 2000; Rourke and Anderson 2002).”** I have not read the article further, because I want to pause to discuss the relevance of this student comfort, particularly in terms of the online asynchronous forum.

It is that very comfort, I suspect, that causes a forum discussion of medieval literature to become, well, uncomfortable.  What I have found in conducting periodic evaluations of forum work (usually every few weeks) is that many students attempt to fill the forum with words that may or may not demonstrate use of the lessons and a true appreciation/understanding of the literature.  They tend to be little more than thumbs-up/thumbs-down reviews at the beginning of the semester, and when they realize that I expect more depth of thought, suddenly, I have lost several students (they’ve withdrawn from the class).  Would this have happened in the on-land classroom, with an on-land synchronize discourse?  It didn’t happen in my on-land medieval literature courses in the past . . . .

There’s the rub.  It’s an issue of expectations, I think.  If a student feels more freedom to communicate online, perhaps that student also feels more freedom to expect simplicity: to expect simplicity of both the course content and of their course participation.  And yet, I was pleasantly amazed by how many thoughtful and thought-provoking statements made in online discussions by most of the students who completed course.  So I am left with an unanswered question: do I expect too much of students in their online discussions of medieval literature, or are the students who withdraw from the class doing so because they feel un-grounded, floating on a chaotic sea of information?

And not a thought to think.

I don’t think it is that.

I think that it is more an issue of comfort, that whether a student is shy or not, there is an issue of interaction that is still a challenge for online classes.  I’ll end this mostly anecdotal rambling with a student’s video on why she is earning her degree in literature: