What does it mean to “Google” medieval fantasy? First of all, just consider the meaninglessness of that question.  The name for the popular search engine, Google, has been turned into a verb.  To Google something is to search for it on that search engine—why not simple search for it, rather than Google it?  To Google something is to make a particular type of search, a cyber-search.  So, what does it mean to cyber-search medieval fantasy?

I’m not trying to state the obvious; my point is that the juxtaposition of cyberspace and medieval is a fantasy.

Anyway, so, using the medium of the Internet (which is actually now a multimodal, multimedia meta-medium), I searched medieval fantasy on Google.  This is what I got: 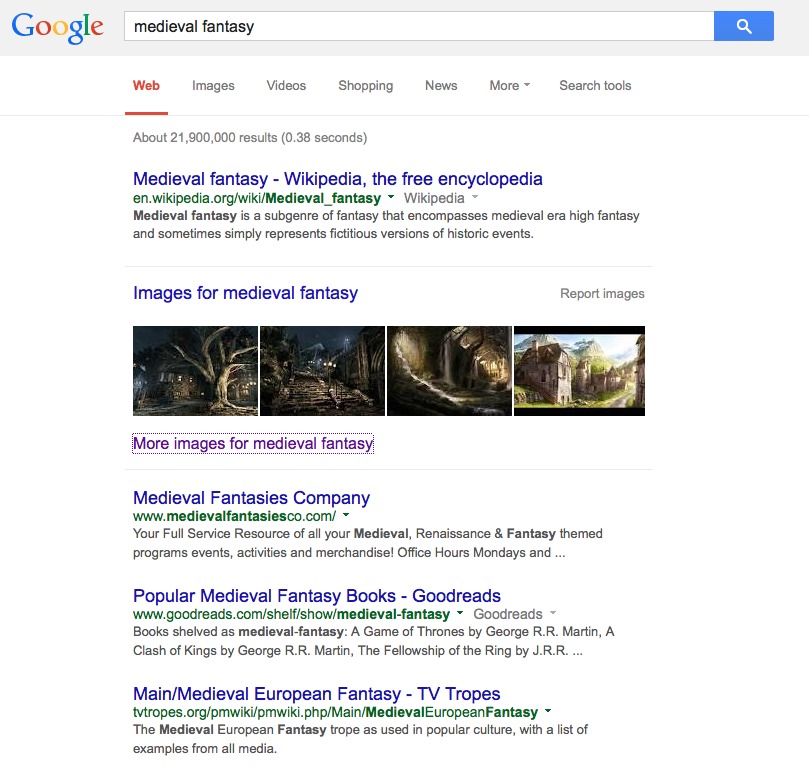 The search of this genre, medieval fantasy, resulted in a nice diversity of media—images, books, television—after an initial encyclopedic listing of the genre.  So, for Google, it medieval fantasy is a genre composed of multiple types of media, including various combinations of multimedia. Then there is the elephant on the Internet: marketing.  Among the first five items listed, in addition to the Wikipedia psuedo-resource and the categories for images, books, and television, there is a store: Medieval Fantasies Company.   This mixture of information, amusement, and marketing emphasizes how much the genre (medieval fantasy) fuels the marketing of the media into which it is shaped.

Not me, of course.  I’m just browsing today, thank you.