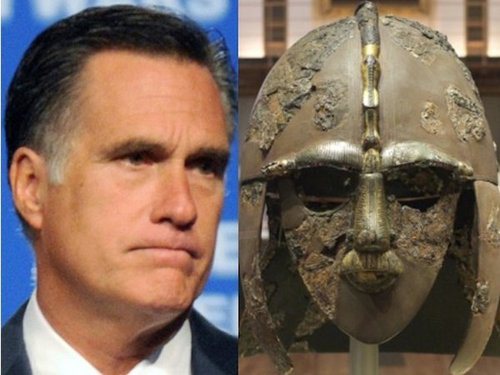 This is one of four posts of a METAPOST–four posts in one! All four posts have been adapted (slightly edited/revised) from presentations made at the 2013 Popular Culture Association/American Culture Association Conference (Washington, D.C.). The session, “Medievalism in Politics Round Table,” was a part of the Medievalism in Popular Culture section (comprised of seven sessions total), organized by Amy Kaufman, who will be posting a response soon.

Media around the world made much of a Romney campaign spokesman’s alleged comment last summer about the “shared Anglo-Saxon heritage” of the United States and United Kingdom, embroiling the campaign in conversations about medievalism and race. Although the spokesman’s comments were quickly disavowed, the scandal never quite went away, perhaps because the comments drew attention to other strange ideas the former governor has expressed about European history.

I want to raise two related issues regarding Mitt Romney’s strange uses of the Middle Ages: one is the way his campaign’s disavowed reference to medieval history is actually pretty similar to the rewriting of history in his recent book, No Apology: The Case for American Greatness, and the other is the way the public reaction to his campaign’s comments revealed to us that popular culture, and specifically popular medievalism, has acted as a sort of regulating force against the unchecked uses of the Middle Ages as a blank canvas onto which political figures can write whatever they want.

Politicians invoking the real or imagined Middle Ages is certainly not a new phenomenon, nor is the tendency – which is evident in Governor Romney’s book, especially in the second chapter, “Why Nations Decline” – to conflate European historical processes with current political debates here in the United States. In this chapter, Romney describes, through his own particular historical lens, the failures of the Ottoman, Spanish, Portuguese, Chinese, and British empires. Although all of these empires lasted long after the early modern period, he pinpoints the causes of each decline, except that of the British Empire, in the medieval or early modern periods.

The Ottoman Empire, Romney argues, amassed most of its wealth early on through pillage and taxes, and that wealth was managed through “massive political and military bureaucracies” (37). The Empire was unable to rally after defeat by “Christian Europeans” in 1571 because of several factors, but most importantly because their intellectual isolation was “reinforced by the conviction that their holy scriptures provided all the knowledge that was necessary; foreign technology was infidel technology” (37). So, for Romney, the decline of the Ottoman Empire, which happened slowly over 400 or so years, can be traced back to the fifteenth and sixteen centuries, the period in which he believes the Ottomans were encumbered by bureaucracy, failed to embrace capitalism, and let their religion lead them into superstition.

Romney writes of the Spanish and Portuguese empires that they failed for similar reasons, including that they used their amassed wealth to keep buying while the rest of Europe was “learning how to make things people wanted to buy,” so that Spain and Portugal remained centers of consumption while “France, England, and Germany became the centers of wealth creation” (39). Furthermore, he argues that Spain and Portugal, like the Ottomans, were suspicious and fearful of the new ideas from the north – presumably the Protestant Reformation – and so shut their borders and their minds to innovation, technology, and learning, considering it heresy (39).

Romney writes next of China; although the Imperial history of China spanned roughly 2000 years, he focuses on the period that coincides with the European Middle Ages, beginning with the invention of a Chinese printing press in 1041, which he points out is 400 years before Gutenberg. He immediately explains, though, that while China was extremely technologically advanced in the 11th century, “the Chinese feared cultural contamination” because Confucious thought it would corrupt them, leading to their complete isolation from other nations by 1500. This time period is remarkable, both in that China went through several different ruling dynasties in those four centuries, complicating any claim about a single reason for increasing isolation, and in that there is no clear reason why the influence of Confucious, a 5th C BCE scholar, should have suddenly gained influence during the 11th century when his influence did not prevent any of the advances that led to that time. In fact, Confucianism was, if anything, somewhat diluted during this period by the influence of Daoism and Buddhism.

Romney’s attribution of isolationism to Confucious becomes clear, however, when he explains that China’s “ancient culture” is what led them to reject technology, likening its effect on China to the Koran’s effect on the Ottoman Empire or Catholicism’s effect on Spain and Portugal.

When Romney goes on to distill the common causes of all these declines, he focuses on three things: (1) the isolation from markets and therefore ideas, (2) “profligate spending” made possible by “easy money” from pillaging, and finally, (3) culture. Drawing loosely on the ideas of historian David Landes, Romney writes,

Just as Islamic culture rejected foreign influence, so the Ottomans rejected foreign technology. The religious beliefs of the Spanish and Portuguese led them to deny foreign discovery and innovation. China’s economic isolation was the logical extension of its rejection of cultural diversity. And the British culture of order, organization, and rigid structure – once assets in Britain’s conquest of nations in the undeveloped world, may have prevented it from developing the risk-taking approach and entrepreneurialism critical in free markets. Culture did indeed make a difference. (41)

Romney explains that all these potential problems exist for us too, and we can only succeed if we do not give in to spending “easy money,” protectionism, or abandoning “the culture that led us to become the world’s greatest nation.”

What Romney is doing here, I think, is simplifying a whole range of historical and cultural processes in order to both attribute the fall of all empires to things that happened during the European Middle Ages and create a simple narrative that he can use to make the case for a certain policies here and now. Using the Middle Ages as a sort of blank canvas onto which such a narrative can be written is both tempting and dangerous, as many scholars have argued.

This appropriation of the Middle Ages proved more dangerous for Romney’s campaign than they might have expected, though. Although his book drew little public attention –despite debuting at #1 on the NY Times bestseller list, it had only sold about 100,00 copies 18 months later – his campaign’s comments drew a great deal. After the initial comments made by the anonymous spokesperson on July 24, a number of news outlets commented on the gaffe, and Salon columnist Joan Walsh wrote a piece titled “What’s Wrong with Mitt Romney?”

Colbert is known as an aficionado of popular medievalism and an extremely enthusiastic Tolkien fan, and has on occasion spoken Old English on his show. His segment on the Romney campaign’s words included this statement: “We must acknowledge our common Anglo-Saxon heritage, but what about our shared Battle of Hastings heritage, when our shared French Norman heritage conquered our shared Anglo-Saxon heritage by shooting an arrow through our shared King Harold’s eye?”

Although Nielsen ratings put Colbert’s viewership around 2 million, those ratings do not yet account for viewers that watch online, a growing number. More importantly, Colbert’s segment on “our shared Anglo-Saxon heritage” was re-broadcast on cable news networks and linked to from various online news sources and blogs. Although Romney campaign spokeswoman Amanda Henneberg had already disavowed the comments by the time Colbert’s show aired, saying “If anyone said that, they weren’t reflecting the views of Gov. Romney or anyone inside the campaign,” journalists around the world continued to mention the incident while covering Romney’s overseas trip. A google search for “Colbert Report Mitt Romney Anglo-Saxon” turns up 918,000 hits, including some news stories from weeks after the incident.

So although Mitt Romney did what many others have done before him, this time popular culture – something that was really a small segment of popular culture – not only directed attention to it, but, I think, kept the incident in the public mind for much longer than other political gaffes of equal weight. Does the rise of popular medievalism mean that political uses of the Middle Ages are going to be harder to get away with? Does this somehow indicate a shift in the way the ideas of “popular” culture and academic or intellectual culture relate to each other?