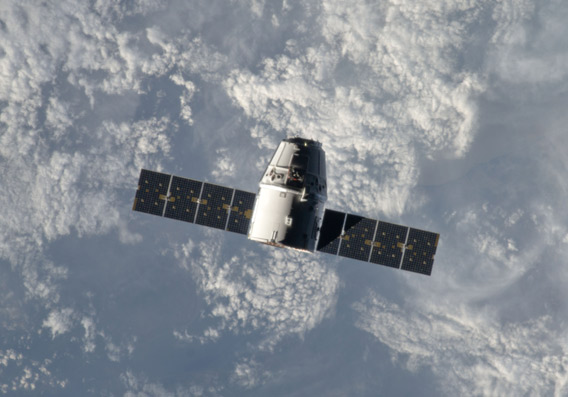 I have to admit that I’ve spent a good part of this summer enthralled by the various endeavors of Space Exploration Technologies: the recent mission to the international space station (and back again!); the prehensile “X” (didn’t that meme go extinct in the mid ’90s?); and the willful, misfit medievalism that attends the entire enterprise.

In medias res, there is a rocket called “Falcon,” powered by “Kestral” or “Merlin” engines and topped by a capsule named “Dragon,” which, in turn, comes outfitted with 18 “Draco” thrusters, boasts a logo that harkens back to the Lego Castle days of yore, and will eventually be able to ferry crews to and from the international space station or even Mars.  In company media releases and elsewhere, these crews are called “Dragon Riders.”  The whole project is called “DragonLab(TM).”

As a graduate student I chose to take Peasant Husbandry instead of Dragon Physiology, so I’m not really the expert that I should be in such matters.  I have, however, conducted an exhaustive internet survey in preparation for this entry, and it turns out that everyone from the 420 crowd to the droll misogynists of urban dictionary.com agrees that with dragons, at least in the western tradition, the fire comes out of the front.  Whereas in rocketry, the fire, generally (and hopefully) comes out the back.

OK, if you really want to nitpick — in the case of a thruster, the fire does indeed come out of the “mouth” of the thruster, so the “Draco” thrusters in and of themselves get a pass.  But, according to Wikipedia and company literature, there are 18 of these things interspersed in redundant pairs on all axes of the capsule.  Apparently, they allow the spacecraft fine yaw, pitch, and roll control.  Traditional Dragons have wings for that and, possibly, a tail.

As for the “Dragon Rider” business, the crew is not situated on the capsule, but in it.  I don’t really want to belabor this point, but, again, there is much agreement in Western sources that if you’re in a dragon, you’re not crew, you’re lunch.

As for “DragonLab(TM)” — I understand that in geek culture one achieves a certain caché in naming various, daunting engineering projects after malign entities from ancient lore.  I heard on NPR the other day that the various conference rooms at Google Venture’s Silicon Valley facility bear names from Middle Earth.  And yes, there is a conference room named Mordor.

(From my day-job adventures as a mild-mannered software engineer and as an aside, we once named one of our software development projects Kali. The name turned out to be quite apropos.)

At any rate, as engineers (software or otherwise), we do things like this to suggest, ever so subtly, our mastery over the task at hand, as a hedge against all of the bad things that are likely happen three days after we release our project to an unsuspecting user-base, and to prove that that at least one of us read a book once, even if it was just something by Anne McCaffrey or the Kama Sutra.

But still, aside from intemperate halitosis, dragons are probably best known in the popular imagination as inveterate hoarders.  They are, in short, wealth-sponges. “DragonLab(TM),” then, is probably not the best name for a capital-intensive, multi-billion-dollar, enterprise endeavor.

Of course, all of this is much more of an exercise in corporate brand synergy than it is an attempt at earnest or even amateur medievalism.  As such, it appropriates elements from popular medievalism with some tenuous connection to the matter at hand (fire and flight) but orders them according to an internal logic that makes sense for the brand and only the brand.  Brand neomedievalism, if you will.

Although it is ostensibly a private company, SpaceX owes much to NASA. A lot of its technology was developed by NASA, which will likely be one of its major customers, with the former assuming much of the latter’s mission and resupply burdens now that the shuttles have been retired.  Arguably, SpaceX has also inherited NASA’s penchant for creative branding of its ship and programs.  But NASA’s shtick was mostly classical mythology — Saturn Rockets, Apollo missions, etc. — not fantastic medievalism. Well, there were two Mars probes called “Viking.”

All of this has gotten me thinking about fantasy, medievalism, and mythology, both as often-overlapping genres and as compelling, organizing fictions. It seems to me that classical mythology is mostly ambivalent, with the emphasis as much on what one loses as what one gains.  Think Persephone or Oedipus or Aeneus or Jason, etc.  Medievalism, at least as we have it now (that is, fantasy), is much less ambivalent and generally more optimistic.  Adventure in popular culture is a relatively straight-forward endeavor, which is to say not subject to the degree of reflection or general pensiveness that characterizes classical mythology.

What is it, I wonder, that makes the medieval more appealing as a privatized, corporate mythology? Beyond spaceships named “Dragon” and launch-assist planes named “White Knight 2,” I’m thinking of bank architecture, which has moved from the neoclassical to the post-medieval. (I think Eco characterizes this one bank skyscraper as a modernist castle where the lords of commerce literally tower over the serfs on the ground.)  But also, of public verses private architecture (on this side of the pond) in general: the Chrysler Building (completed in 1930) vs. the National Gallery of Art (1938) or the Lincoln Memorial (1927).  I guess complicating things is the Hoover Dam (1935), which was originally meant to have Gothic balustrades, but was revised to be the Art Deco masterpiece that it is today.  And so, I will end with this impossible image: gargoyles on the Hoover Dam. Oh, wait….